I haven’t really played a game properly since back in my Counter Strike days, but recently my brother and I started playing Minecraft… and its incredibly addictive!

Minecraft give you the option of running a Java based dedicated server and so as we were starting out, my brother would start up a dedicated server and we would both connect to it.
As time went on, we thought it would be really cool to have a dedicated Minecraft box and thought we could build one out of some old hardware, which brings me to the HTPC!

A little while ago, my brother built this (the black box): 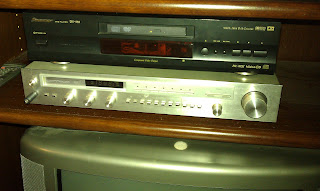 He did an awesome job!
Basically gutted our very first dvd player (which was great for its time) and got some cheap (physically small) hardware off eBay and managed to fit it all inside!
It involved making alot of little brackets, extender cables, etc. but with a lot of effort it turned out pretty impressive!

Unfortunately, using it as a media pc was a bit tough as it wasn’t the most powerful of machines around and the graphics drivers weren’t working too well so this got left in the dust for a while… until Minecraft came along!

Last weekend we decided to make this our dedicated server :)
A while ago a friend of a friend was talking about how good Arch Linux was for its simplicity and ease of administration, so I started reading up on it and I am impressed!

On the Arch Linux wiki they have a couple of guides to help you get going, but my favorite page was the explanation of the boot process.
After a bit of reading I worked out my plan of attack:

After the server was all setup, I wrote a little client side wrapper that will:

So now when I want to play Minecraft, I launch my script and it will power on the server and launch the client, I log in, wait about 5 seconds until my fancy fade-in notification appears, then join the server, play, and when im done, I issue the ‘/stop’ command in Minecraft and it will stop the server and power it self off!

This was a great first experiment with Arch Linux and I didn’t even know what getty was before this day.

Needless to say I was pretty happy with this setup and all in a days work :)
Read More