I’ve had an interest in electronics since a very young age, but I never really went further than building simple circuits as a kid and learning the theory and following diagrams through school.
There’s always the odd repair job, and plenty of theoretical knowledge from family, friends and university, but I wouldn’t be able to design the electronics of anything complex.

A little while back, a friend of mine got an email from meetup.com with suggested meetups. One of them was the Melbourne Hackduino meetup.
So he forwarded it on to our group of friends and a few of us went along to check it out. I’ve always wanted to play with a microprocessor, but never really put the time aside for it. Being a software developer there was always this barrier between the programs I write and making them do something in the real world.

Well, in the last week that barrier has been lifted! The meetup was great and hearing about other people’s hobbies and projects provides plenty of motivation! We heard stories about everything from people trying to optimize solar hot water systems to building full size mechanical avatars. It was a lot of fun!

Mark Butt, the organiser of the event gave us a presentation of some of the cool things he has done in the past, such as an arduino powered bar counter top that detects what drink you put on it and a run down of some of the things he plans on doing in the future, all very cool!

One really nice bonus was the generous offering from Freetronics. There were a few people from Freetronics at the event and other than being very knowledgeable, they brought a big bunch of assorted hardware to give away! They had everything from RGB LEDs to full blown Arduino boards.
I was lucky enough to score an EtherMega 2650, which from what I can tell is a beefed up Arduino with an Ethernet port (with power over Ethernet) and a MicroSD card reader. Some of my friends got a LCD shield that can display 2 rows of 16 characters and has a few buttons on board. For those that aren’t up with the lingo, a shield is an attachment for a standard Arduino board to add functionality.

Together we had enough hardware to be able to make something cool! :-)
Needless to say after some great conversations about hardware hacking and being given some gear to get going, we were all pretty keen to get started hacking, so on the following Saturday three of us got together for a hack night.
The guys came around that night, we ordered pizzas and worked through the night till about 5:30 AM! We had one experienced hardware guy, @asellitt, but the other two of us, @optiks and I, were completely new to this, but between Anthony, the sample code that comes with the IDE and the Internet we picked it up pretty fast!
By the end of the night we had the first version of CarDuino!

CarDuino is a simple game where you hold the screen in portrait orientation and move your car from side to side to avoid obstacles. It’s a very simple game, and we have plenty more features in mind for the future, but it was a great first project!

After sleeping in till about lunch time there next day, I wanted to put my EtherMega to use, so I spent the rest of the day fiddling with that. With network access, power over Ethernet and a card reader, this is a perfect platform for controlling things via a web interface. As my background is web development, this was right up my alley! Using various sample code, I put together a really basic web server that can respond to different requests and serve files from its built in memory card reader. 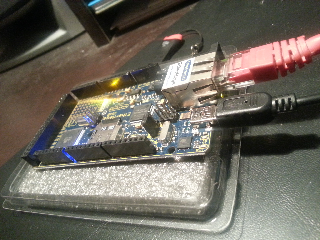 In just a few days, we went from no Arduino experience to a working project (or two). Especially with basic programming experience, the entry level for getting into Arduino is really low. When you buy (or build) a board and download the software, you have enough sample code with the IDE to make things happen, and you can get a lot done by simply copying and pasting!

I recommend having a play with this stuff, its really fun and more than likely, one day you will come across a problem that you will be able to solve with an Arduino!